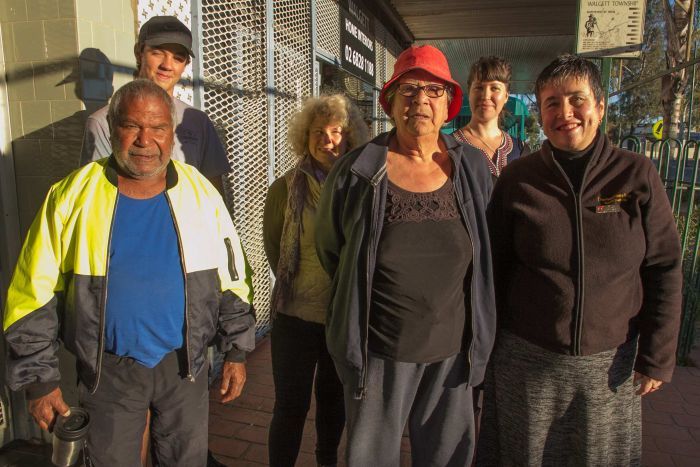 Power bills are soaring across Australia, but in remote areas with extremes of temperature the cost can be cripplingly high.

In Walgett in far north west NSW, temperatures can dip to below zero in winter and climb to over 50 degrees Celsius in summer making it expensive to heat and cool homes.

“You pay a lot of money for the power, it’s hurting a lot of people,” said local elder Clem Dodd.

Fears are growing among elders that people in poorly insulated and poorly equipped housing are descending further into poverty.

The Dharriwaa Elders Group at Walgett has been working to try to address concerns about costly bills, with some as high as between $2000 and $5,000 a quarter per household.

Project officer for the group Wendy Spencer said power price rises was one issue but another was the state of housing.

“A lot of the social housing is poorly built and poorly maintained and not insulated. People are pumping out heating and cooling and it’s all just sort of evaporating,” Ms Spencer said.

She said often there were cracks in walls, poor seals on windows and inefficient appliances.

“They’ve got ancient hot-water services that are heating up the cold air outside and really old fridges that use 10 times the power that modern fridges do,” she said.

Ms Spencer said many elders and community members were spending nearly all their income on paying power bills while sacrificing food and clothes.

A study on power prices at Walgett has been conducted through a partnership with the University of New South Wales.

The study identified higher tariffs, inefficient appliances and a lack of energy education as factors behind the higher costs.

Electricity meters were installed in elders’ homes to help them monitor energy use and identify faulty electrical items.

But now, Walgett elders are looking at solar as a possible answer to their problems.

A new solar farm operated by renewables company Epuron has been set up near Walgett.

The Valley Centre’s April Crawford-Smith is involved in both groups and has visited Walgett to start work on the plan to install solar panels.

“Solar addresses the cost which is a little bit more than the cities. It addresses the supply which again out here is really unreliable,” Ms Crawford-Smith said.

Solar could be just months away

Homes will be audited for solar suitability and funding will be sought for the project.

Ms Crawford-Smith said Pingala and the Valley Centre had helped many other remote communities with solar.

She said they were there to support Walgett, but not run the project.

“We provide the connections to networks, to the technologies, to the funders but the community has to own it and drive it themselves,” she said.

Ms Crawford Smith said once connection approval was received from NSW energy supplier Essential, Walgett could be benefitting from solar within a few months.

Ms Spencer said access to cheaper power could lead to more jobs and enterprises in Walgett as well as reduce power bills.

Rohan Thomas is the Director of R.T Projects and manage all major solar and electrical projects. Not only has Rohan been in the Solar Industry for over 10 years but he has managed large scale solar and electrical projects and understands the work required. Rohan is an accredited Clean Energy Council Solar Installer and Designer as well as holding a Battery Design & Install License.

Solar Power: Is it worth it?August 4, 2020
Mounting Options: Commercial Solar InstallationsJuly 13, 2020
A Major Breakthrough That Could Put Solar Power Anywhere. Worth checking.